Visualizing the 20 Best-Performing Stocks of the Last Decade

The 20 Best-Performing Stocks of the Last Decade

Hindsight is 20/20. It can be incredibly difficult to pick the “next big stock” in the moment, but looking back gives us clarity on where we could have reaped the highest rewards. While some of the decade’s chart-toppers—like Netflix and Amazon—are household names, other stocks may come as a surprise.

Today’s visualization reveals the best-performing stocks over the last 10 years, and shows how much an initial $100 investment would be worth today.

To compile the list, MarketWatch reviewed the current S&P 500 constituents and excluded any stocks that have traded in their present form for less than 10 years. The remaining companies were sorted based on their total return, with reinvested dividends, from December 31, 2009 to December 5, 2019.

So, which stocks come out on top? Here’s a full list of the top 20, organized by ranking:

In comparison, $100 in the S&P 500 index overall would have amounted to $344 over the same time period. Let’s take a closer look at these strong performers.

Streaming giant Netflix takes the #1 spot. The company earned a staggering 3,767% return over the last ten years, meaning an initial $100 investment would now be worth almost $4,000. However, it remains to be seen whether Netflix’s first mover advantage will remain strong with new competitors entering the space.

One such rival, Amazon, takes its spot at #10 in the best-performing stocks of the decade. From its humble roots as an online bookseller, the company has transformed into an ecommerce leader. CEO Jeff Bezos credits Amazon’s admirable success to three key customer-centric factors: listen, invent, and personalize.

At #12 on the list, Constellation Brands—owner of several alcohol brands such as Corona—is also no stranger to invention. The company is protecting itself against cannabidiol (CBD) disruption with a $5 billion dollar investment in Canopy Growth, and future plans to create its own CBD-infused beverages.

Other well-known names on the top 20 list include discount department store chain Ross Stores (#15) and the credit card company Mastercard (#17), with the latter benefiting from an oligopoly in the industry.

Flying Under the Radar

Apart from the names you’d expect to see, there are also some lesser-known companies that made the list.

Fourth place company Transdigm Group gains its stronghold by developing specialized products for the aerospace industry. It has a strong acquisition strategy as well, having acquired over 60 businesses since its formation in 1993.

If we organize the top 20 by sector, information technology stocks appear in the list most frequently with five companies, followed by consumer discretionary (4 companies), and industrials and healthcare (3 companies each). 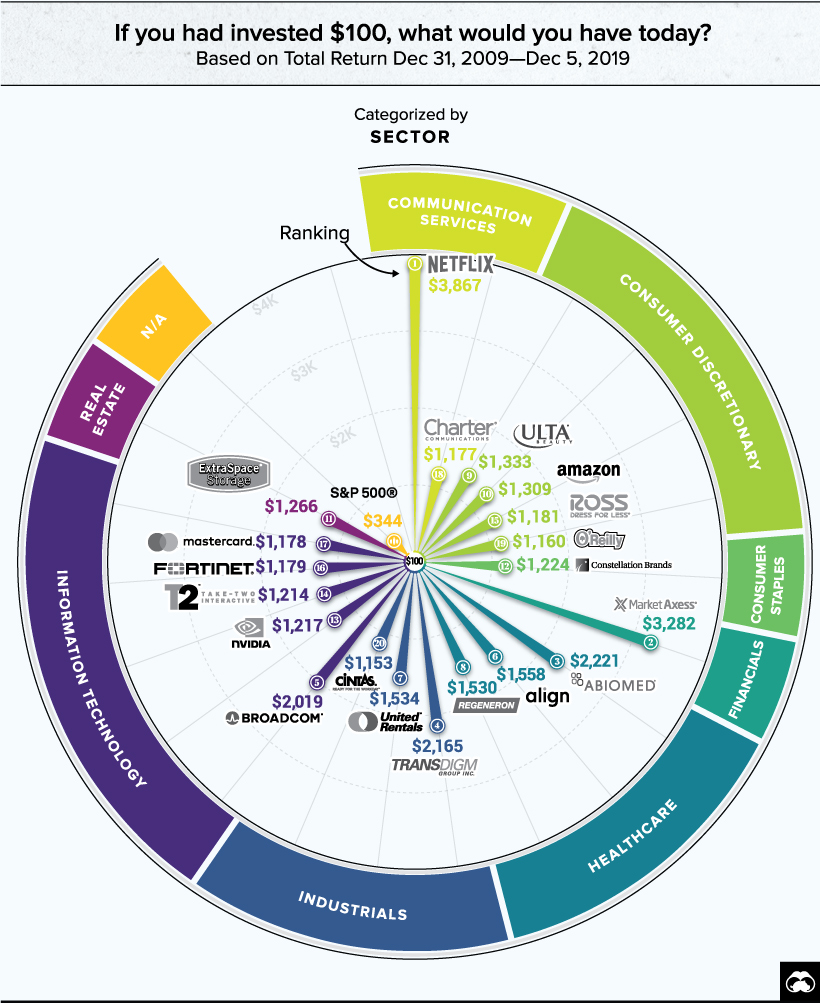 Sectors with less representation in the top 20 are communication services (2 companies), as well as consumer staples, financials, and real estate (1 company each).

While these stocks have performed extremely well over the last decade, they are not necessarily the best portfolio additions today. Some companies may have become overvalued, or be facing new competition in their industry—as is the case with Netflix. It’s best to consider all current information when building a portfolio.

However, the top 20 stocks do demonstrate the power of a buy-and-hold strategy. If you’re lucky enough to identify a winner early on, it’s possible to simply sit back and let your dollars grow.

An Investing Megatrend: How Technological Breakthroughs are Shaping the Future

10 Global Insights into a Transforming World