By now, you’ve likely heard of the ambitious plans for our new book “Visualizing Change”.

We’re aiming to take hundreds of pages of our best infographics, charts, and visualizations, and connect them with one universal theme: what are the fundamental forces shaping the business and investing world?

To make the book a reality we are funding through Kickstarter – and with just a few days remaining to reach our goal, only you can help us make it there.

As we get closer to the funding deadline, we’ve been working hard to imagine how the book could look. Click below to see two exclusive sneak previews of how the pages of this infographic book will be laid out:

The final product is guaranteed to capture your imagination with hundreds of pages of our best work to date, including 40+ pages of new, never-before-seen infographics!

To date, we are still short of reaching our funding goal to make the book – and now there are less than 10 days left.

Want to help make sure it goes into production? Here’s how you can help:

It’s zero-risk to pledge on Kickstarter, and credit cards don’t get charged unless we reach our funding goal. You Asked For a Visual Capitalist Book… We’re Making It Happen!

6 Reasons Why Signals is a Great Holiday Gift

We’ve pulled together 6 reasons why our new coffee table style book Signals is the perfect gift to inspire and encourage this holiday season. This year Christmas will be a little different.

There’s uncertainty on whether family and friends will be able to gather over the holidays, and your annual work Christmas party may be virtual instead. That’s why this year, the act of giving is more important than ever.

We’ve pulled together 6 reasons why our new book Signals is the perfect gift to inspire and encourage, and why your loved ones deserve Signals under the tree.

Buy Signals as a Gift

The graphics in Signals were designed exclusively by our team for the book, so all 258 pages feature fresh new infographics, charts, and maps.

Signals is custom printed on high quality paper to make the visuals really stand out, and is protected by a strong hardcover.

Keep your brand at the top-of-mind going into 2021 by sending Signals as a corporate gift.

Our customized bulk orders include custom book jackets, your company logo and colors, a personalized note, and discounted bulk pricing. 3. As a result of the pandemic, people are reading more.

With no social obligations, no commute, and more time on our hands, there’s plenty opportunity to dive into a good book.

Our latest book has 27 signals to explore, with hundreds of different charts and visualizations to check out when there’s a spare minute.

4. Left your holiday shopping too late?

If you cut it too fine for shipping, Signals is available as a PDF eBook, so readers can dive into all chapters on their phone, tablet, or desktop for an affordable $9.95 USD.

The eBook is instantly downloadable, so it can be enjoyed right away. 5. It’s the gift that keeps on giving.

Signals identifies simple and clear takeaways on the trends that will define the next decade.

The powerful data found throughout the book can be used as a reference point to better understand the factors shaping the future direction of the economy, enabling professionals and investors around the world to make smarter decisions.

6. There’s something for everyone.

Readers can take a closer look at topics that interest them, while learning something new about areas they are less familiar with.

Chapters in the book include:

Take a look at the full table of contents below. Copper is a global industry, from the mines of South America to refineries in Asia. However copper’s supply chain has several inherent risks. 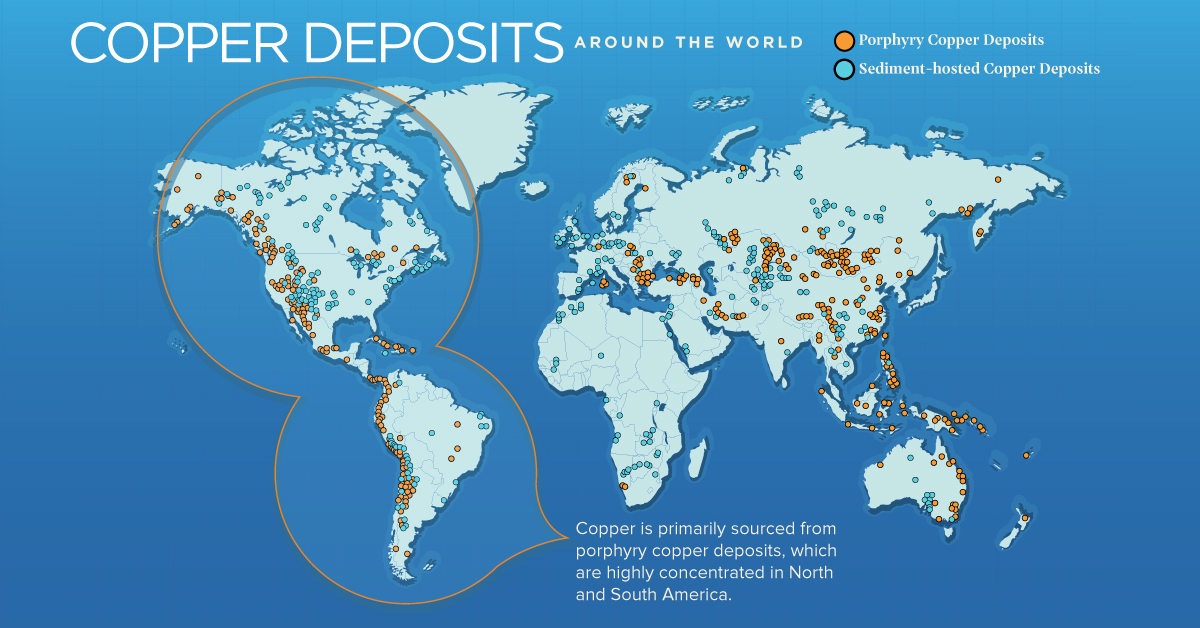 Copper is all around us: in our homes, electronic devices, and transportation.

But before copper ends up in these products and technologies, the industry must mine, refine and transport this copper all over the globe.

This infographic comes to us from Trilogy Metals and it outlines copper’s supply chain from the mine to the refinery.

Copper Deposits Around the World

Copper is a mineral that comes from the Earth’s crust. However, natural history did not evenly distribute it around the world. There are certain geological conditions that need to happen to make an economic deposit of copper.

There are two primary types of copper deposits:

Copper-containing rock or ore only has a small percentage of copper. Most of the rock is uneconomic material, known as gangue. There are two main copper ore types in mining: copper oxide ores and copper sulfide ores.

Both ore types can be economic, however, the most common source of copper ore is the sulfide ore mineral chalcopyrite, which accounts for ~50% of copper production.

Sulfide copper ores are the most profitable ores because they have high copper content, and refiners easily separate copper from the gangue. Sulfide ores are not as abundant as the oxide ores.

While copper is a global business, there are clear leaders in the production and refinement of copper based on geology and demand. Chile is the major source for copper, exporting both mined and refined copper.

However, this concentrated geography of supply creates risks for the the copper trade.

While Chile is one of the richest sources of copper in the world, the mining industry has exploited copper deposits to the point where the grade or quality of the copper ore is declining.

Codelco, the national copper miner of Chile and the world’s largest producer of copper, plans to spend $32B by 2027 to extend the life of its current mines and maintain its copper output.

In addition to declining grades, the geography of copper mining exposes the risk of supply disruption by natural forces.

The borders of Chile and Peru overlap the intersection of the Nazca and the South American Tectonic plates. Movement of these plates can produce powerful earthquakes.

Copper for the Future: New Discoveries

As economies grow and infrastructure needs increase, the demand for copper will grow. However, without new discoveries and sources of production, the world could face a shortage of the red metal.

According to data from S&P and the London Metals Exchange, the discovery of copper has not kept up with investment in copper exploration. If this trend persists, there will not be enough copper to replace current resources. On top of this, production from already producing copper mines face resource exhaustion and declining grades.

In order to maintain copper’s supply chain, the world needs new copper discoveries to ensure everyone has access to the materials and products that make modern life.