The 50 Most Valuable Sports Teams in the World

Every year, Forbes analyzes the sports world to produce a list of the 50 most valuable sports teams in the world.

The most valuable team for the third year in a row is Real Madrid CF, which first overtook Manchester United on the list in 2013. However, the amount of time that Los Blancos will top the rankings could be limited. American franchises have been shooting up the list lately, with the iconic Dallas Cowboys and New York Yankees franchises both passing the $3 billion mark for the first time to tie for second place at $3.2 billion.

Why are sports teams more valuable these days? Forbes notes that leagues and teams are signing more lucrative television deals, with live sports being an important draw in the world of PVRs and streaming. The NFL, for example, split a massive $7.24 billion in revenue with all 32 teams last season. Each team received a hefty $226.4 million, mostly from television deals.

The value of NBA and MLB teams have been soaring in recent years. In 2014, there were only 10 on the list, and this year there are 22 baseball or basketball teams.

How Affluent Millennials are Changing the Finance Industry

This unique map provides an in-depth snapshot of the state of the world wide web, highlighting the most popular websites on the internet. The internet is intangible, and because you can’t see it, it can be hard to comprehend its sheer vastness. As well, it’s difficult to gauge the relative size of different web properties. However, this map of the internet by Halcyon Maps offers a unique solution to these problems.

Inspired by the look and design of historical maps, this graphic provides a snapshot of the current state of the World Wide Web, as of April 2021. Let’s take a closer look!

Before diving into an analysis, it’s worth touching on the methodology behind this graphic’s design.

This map highlights thousands of the world’s most popular websites by visualizing them as “countries.” These “countries” are organized into clusters that are grouped by their content type (whether it’s a news website, search engine, e-commerce platform, etc). Editor’s fun fact: Can you spot Visual Capitalist? We’re right in between TechCrunch and The Guardian above.

The colored borders represent a website’s logo or user interface. In terms of scale, each website’s territory size is based on its average Alexa web traffic ranking. The data is a yearly average, measured from January 2020 to January 2021.

Along the borders of the map, you can find additional information, from ranked lists of social media consumption to a mini-map of average download speeds across the globe.

According to the designer Martin Vargic, this map took about a year to complete.

Google and YouTube take up a lot of space, which is unsurprising—they’re the two highest-ranked websites on the list:

Google has held the title as the internet’s most popular website since 2010. While Google’s popularity is well understood, the company’s dominance might be even more widespread than you’d think—across all Google-owned platforms (including YouTube) the company accounts for 90% of all internet searches.

The third highest ranked website is Tmall. For those who don’t know, Tmall is a Chinese e-commerce platform, owned by Alibaba Group. It focuses on Business-to-Consumer (B2C) transactions, and has established itself as the most popular e-commerce website in China—in Q1 2021, Tmall accounted for more than 50% of China’s B2C online transactions.

When it comes to the top 50 websites overall, a majority are either social networking platforms, search engines, or online marketplaces—while this may not come as a surprise, it’s still powerful to see visualized. For instance, even a huge, well-known website like the New York Times is just a tiny country on this map.

And of course, a map of the internet isn’t complete without mention of the dark web.

While it’s challenging to determine its true size, research indicates that the dark web accounts for a large portion of the internet’s true size. And apparently, it’s growing steadily, with the help of anonymous cryptocurrencies like Bitcoin.

For the most part, it’s believed that the dark web is used for unsavory reasons—however, it’s not all bad. Because of its anonymous nature, it can be used as a safe space for whistleblowing or activism.

Overall, this map, and the internet as a whole, has many places for us to explore. When you dive in, what “countries” catch your eye?

This giant infographic explores the biggest passenger ships on the open seas, over a period of almost 200 years. 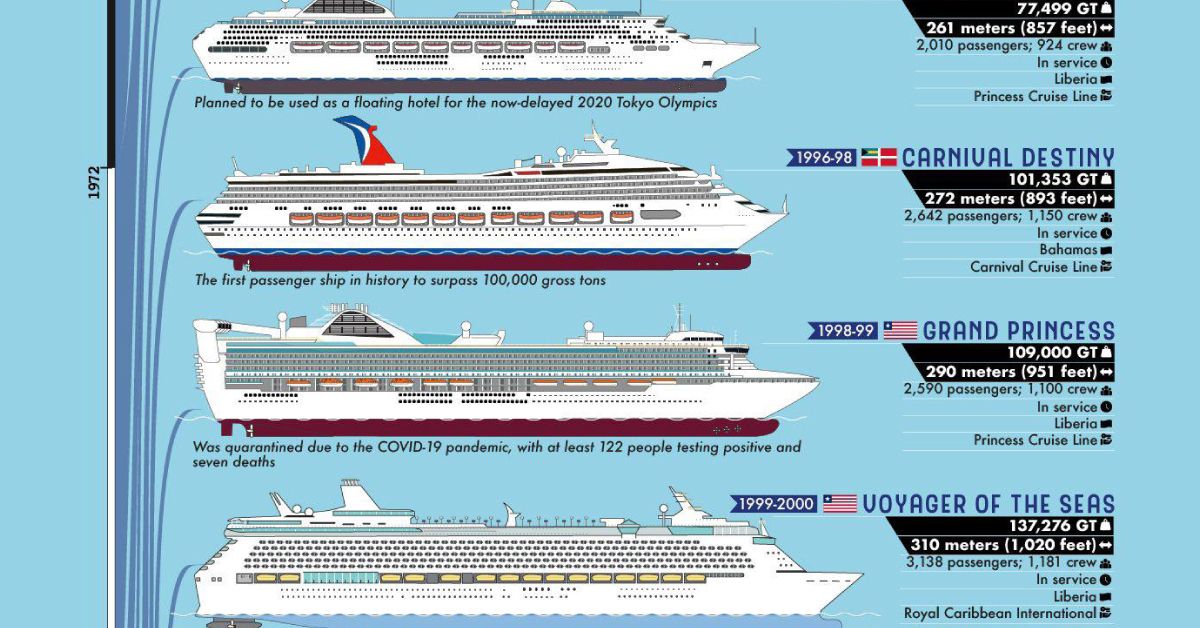 The Titanic lives large in our minds, but it’s probably not surprising that the world record for biggest passenger ship has been broken many times since its era. In fact, today’s largest passenger ship can now hold over 6,000 people—more than double the Titanic’s capacity.

This graphic by HMY Yachts looks at which vessels held the title of the world’s largest passenger ship over time, and how these vessels have evolved since the early 19th century.

Before diving into the ranking, it’s worth explaining what constitutes a passenger ship.

Passenger ships are vessels whose main purpose is to transport people rather than goods. In modern times, there are three types of passenger ships:

Traditional ocean liners are becoming obsolete, largely because of advancements in other modes of transportation such as rail, automobile, and air travel. In other words, the main priority for passenger ships has changed over the years, shifting from transportation to recreation.

Now, luxury is the central focus, meaning extravagance is part of the whole cruise ship experience. For example, the Navigator of the Seas (which was the largest passenger ship from 2002-2003) has $8.5 million worth of artwork displayed throughout the ship.

Now that we’ve touched on the definition of a passenger ship and how they’ve evolved over the years, let’s take a look at some of the largest passenger ships in history.

The first vessel on the list is the SS Royal William. Built in Eastern Canada in the early 1800s, this ship was originally built for domestic travel within Canada.

In addition to being the largest passenger ship of its time, it’s often credited as being the first ship to travel across the Atlantic Ocean almost fully by steam engine. However, some sources claim the Dutch-owned vessel Curaçao completed a steam-powered journey in 1827—six years before the SS Royal William.

In 1837, The SS Royal William was dethroned by the SS Great Western, only to change hands dozens of times before 1912, when the Titanic entered the scene.

The Titanic was one of three ships in the Olympic-class line. Of the three, two of them sank—the Titanic in 1912, and the HMHS Britannic in 1916, during World War I. Some historians believe these ships sank as a result of their faulty bulkhead design.

Fast forward to today, and the Symphony of the Seas is now the world’s largest passenger ship. While it boasts 228,081 in gross tonnage, it uses 25% less fuel than its sister ships (which are slightly smaller).

2020 was a tough year for the cruise ship industry, as travel restrictions and onboard outbreaks halted the $150 billion industry. As a result, some operations were forced to downsize—for instance, the notable cruise operation Carnival removed 13 ships from its fleet in July 2020.

That being said, restrictions are slowly beginning to loosen, and industry experts remain hopeful that things will look different in 2021 as more people begin to come back on board.

“[There] is quite a bit of pent-up demand and we’re already seeing strong interest in 2021 and 2022 across the board, with Europe, the Mediterranean, and Alaska all seeing significant interest next year.”
-Josh Leibowitz, president of luxury cruise line Seabourn